Since the sad departure from the tangled house under the mountains in El Bruc, I’ve been quite busy trying to dig my way into real life. Job application after job application after story pitch after submission has flown from my outbox and landed somewhere in cyberspace’s ear-less abyss.

Christmas was magical, New Years brought new life and the period around my birthday was filled with smiling faces and wine under the sunshine… but the drudge continued throughout it all. Three months of hustling every day, writing, applying for full time positions and dealing with everything that comes from living in a foreign country really takes it out of you.

There was no other choice except get some fresh air, move to pastures anew and wash off the dust of the slog in the pouring rain (and, oh boy, was there rain).

This is the story of Bonica and I in Portugal.

Landing in the Patchwork City

The first refreshing sight on the trip was the plane sitting on the runway of Alicante airport. It was tiny, swift looking, as if it were a LED-lit child’s toy. It was a freaking propeller plane. How often do you see that now-a-days, huh? I’ve never been inside such a zany contraption, so the experience of boarding the relatively rickety little thing (I’ve only ever flown in Boeing jets before, to my knowledge), filled me with a kid-like excitement. Propeller plane! Propeller plane!

We arrived some hours later on the opposite side of the Iberian Peninsula, in Lisbon airport, suddenly cold, dark and wet where the Costa Calida was dry and sunlit. After taking a metro through half a dozen retro-futurist train stations and arriving at our accommodation amidst impersonally tall and uniform buildings, I couldn’t help feeling like I’d been sucked back in time, or to another reality at the very least.

Here is where the strange essence of the Lisbon aesthetic started to creep in. Thanks to its incredible, vaulted train stations and deco/brutalist touches, the city felt like a clean and optimistic future utopia that had been left to rot and mould over after decades in the rain. In places, particularly places like the Baixa-Chiado station, I could imagine robed and gleaming white figures wandering the halls, debating quantum philosophy and wandering what to do with all those barbaric lizard people under the planet’s crust.

And from the sci-fi underbelly grows a world of tightly packed and chaotically coloured shamble-houses, with twisting metal staircases and power lines draping like spiderwebs. The damp, polished tile that seemed to cover everything in the city created a rainbow effect that confused and dazzled the eye. Lisbon is a city of layers and patchwork, a beautiful mess of a place with promise down every street and up every flight of stairs.

A Spaniard and an Australian Walk into a Portuguese Restaurant

The first day in Portugal was spent wandering about in an Azulejo haze, trying to get out grips on a city that twisted and tangled in every strange direction, but always seemed to flow back to the river. The River Tagus, which flows mightily through Spain and empties out dramatically to the Atlantic Ocean west of Lisbon, seems to collect everything, even the people. No matter where you wander in Lisbon, you’ll probably always end up back on the cobblestone sidewalks of the main shopping drag that lead you, through desperate hawkers of Spanish paella and Portuguese codfish, to the Praça do Comércio. It’s a mysterious effect, compounded by the pounding rain that shot down at us in random bursts throughout the day. Bonica and I always seemed to be ducking and diving, trying to save the struggling umbrella, and always ending up under the magnificent Santa Justa Lift.

We decided to spend a little and grab lunch at a slightly fancy place down the hill. We were on the look out for the traditional, the real and honest and we definitely found it. In a steaming restaurant we ordered heaped plates of cod (bacalhau being the obsession of Portuguese people across the world, apparently) and wine. Unfortunately and fortunately, we accidentally ended up with sweet port instead of table wine. Well, “when in Lisbon”, we thought, then stumbled out tipsy, red-faced and stomachs heavy with the peninsula’s favourite fish.

And, of course, it started chucking it down. I’ve gotten used, now, to deserts and palm trees and had forgotten the half thrilling/half drilling experience of being drenched from head to toe. But in the rain and white light, the colours of Portugal’s capital shone out even clearer.

By far the most impressive retro-futuristic vision in Lisbon is the Calouste Gulbenkian Museum, which we visited on the second rainy day in Lisbon (spoiler alert: they were all rainy days). Through this strangely yet evocatively laid out gallery I learned more about Portuguese history than I ever had before (which was about nada) and soaked up those good contemporary art vibes that I need to devour out of every European city I visit.

But more than the art, though, which slinked to the back of my memory, I remember now being wowed by the building itself and the marvelous, almost Australian, garden that it sat in. We watched the cold grey world of ducks and water from within a warm, cream spaceship before heading through the rain forest of a garden and arriving at a dark wood and gold hall of antique works, set within a building of such 70’s/80’s utopian vision that my breath was taken away. Definitely a recommendation from me if you want to lose your contemporary self for a moment and disappear back to a timeless, hope-filled place.

Over the next days we journeyed to the other landmarks of Lisbon, The Belém Tower with its imposing, filigree bulk at the edge of a turbulent wold (made all the more turbulent by the insane weather) and to the unbelievably powerful Monument of Discoveries (both a telling reminder of colonial vigour and of its brutal oppression). The damn thing stretched up all the way to the sky, all white stone going pink under the sunset. And then the full moon rose over the pregnant clouds and the 25 of April Bridge, sealing the day in my memory. It hardly mattered that we were buffeted by rain, shouted away by police and aimed at, literally, by a sniper protecting the visiting President of Germany while trying to get into the Jeronimos Monestary.

The final site to mention is the Convent of Carmo, a windswept and brutalised relic from the past that now welcomes thousands of tourists a day. The open roof of the old Roman Catholic church is a reminder of the impermanence and importance of the grand structures we now pay money to snap photos of and quickly forget. Standing under the gigantic bones of one of the country’s most magnificent building, all while dodging the downpour and remembering the awesome, awful earthquake, fire and flood that leveled the city all those years ago, filled me with a great appreciation for time.

On Germans and the New Berlin

Never before have I visited a place where there were less English speaking tourists than tourists from other countries. Lisbon changed that. In every bar, around every corner and down every street, the rounded and bouncing sounds of German could be heard, mingled with lilting French and a bit of universal, functional English mixed in. Not being able to communicate with my German pals (of course, I have a bit of an affinity for them since spending my transformative six months in Mannheim), made me a bit anxious, itching to relearn a language skill lost that then seemed so necessary.

Lisbon’s status as the “New Berlin” will definitely have had something to do with that. The renegade spirit of the Portuguese government and people have defied EU austerity and stomped forward into gentrification and a renewed creative class. No where is the spirit of the “New Berlin” more obvious than at LX Factory, a sort of hipster village tucked under an unbelievably tall overpass.

LX Factory is stuffed to the brim with interesting people and interesting things to see and buy, but after spending so much time around the sterile brand of hipster culture that now infests the world, everything not under a layer of poster-sticker grime feels tacky, same-old and bland. Down with pastel colours and birch wood benches. Down with Airspaces! I want honesty, true grime or true simplicity, and that’s nothing you can sell.

One brilliant example of what I’m looking for in the LX Factory is the Ler Devagar bookshop, a multi-level shop lined with industrial walkways and kinetic artworks. Secondhand books mix with brand-new and glossy ones on the shelves and there is an unmistakable musk of things that have been read and loved long ago.

The world now is a shattered mosaic, most clearly seen in sub-cultural hotspots like LX Factory and the Time Out Market. Our globalised society is now centred around an individualistic, disruptive race to succeed and emerge from a mess of merged cultures. The shattered mosaic is re-arranged daily, dressed up and then sold again for a high price, a price that requires yet more shattering, more fighting, more dishonesty and fighting tooth-and-nail for your place. Even getting dinner in the brave new format of the Time Out Market becomes a stressful experience, in which you must display your knowledge of culture, cuisine, spending big bucks (relative to the simple restaurants in town) and, at the same time, biting for a place to simply sit.

Labelling Lisbon as the “New Berlin” has brought with it incredible prosperity and a glut of well-educated, driven and constantly productive young professionals, but it has also brought with it the wave of expectation that has already drowned so many hopefuls in the Old Berlin. Rents are going up so much that locals cannot afford to live in the centre anymore. Start-ups flourish only to be snapped up by larger corporations out of the beating heart of the city and turned into generic, Helvetica-font appendages of larger monsters. Perhaps being the New Berlin isn’t such a great thing.

But at least there’s the colour. At least there’s music and pride and excitement for now. It overrides the bubbling fear that soon, sooner than you can blink let alone plan a move and life, Lisbon will be done and a new city will be the “New Lisbon”. 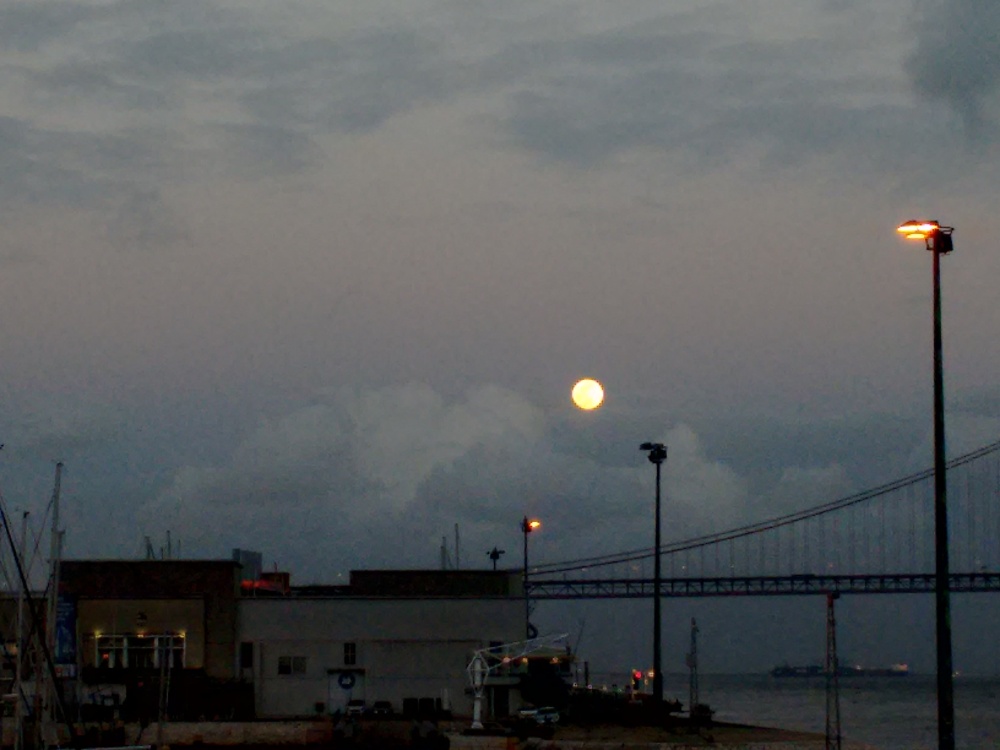 One thought on “Rain on the Azulejo – Portugal (Part I)”